Mid-Autumn Festival, or perhaps more commonly known as Mooncake Festival, is coming! Have you picked up those well-loved boxes of decadent mooncakes yet? If you haven't, be sure to consider the selection available at Peony Jade!

Read on >>
No comments:
Email ThisBlogThis!Share to TwitterShare to FacebookShare to Pinterest
Labels: Media Invite, Mooncakes We may have become so accustomed to mooncakes being associated with the Chinese culture and traditional ideas that we think that it's a little out of the ordinary to purchase mooncakes from a French patisserie. But I can't begin to tell you how much you're missing out on if you don't get your hands on these mooncakes! They are indeed out of the ordinary, they are extraordinary.


Read on >>
No comments:
Email ThisBlogThis!Share to TwitterShare to FacebookShare to Pinterest
Labels: Mooncakes

As usual, we went to the Mooncake Fair this year. I tried all the mooncakes with sea salt caramel. And the best has got to be Fairmont's Sea Salt Caramel with dark chocolate mooncake!

The rest just didn't quite cut it. Sorry for the missing mooncake, my uncle was too excited and ate it before I could take a picture. Hahaha. This year we had our fair share of mooncakes from Raffles Hotel, Shangri-la, Home's Favourite etc. But this mooncake was my favourite [: It might be too funky a flavour for some but for a sea salt caramel and chocolate lover, it's definitely awesome. Haha the sea salt caramel lies in a chocolate coated ball which sits in the middle of the mooncake. The smooth and buttery texture of the filling kind of melts in your mouth! Very unique indeed

I tried Four Seasons durian mooncakes for the first time this year, at the fair. The lady very excitedly introduced to me what was inside the mooncake. Pure durian puree with no sugar, additives etc. So I asked "is the durian the same as the one in the durian pancake? " And another staff answered "YES!" with such zest. And I was really dumbfounded. If its the same puree, and the puree is what makes the mooncake taste good, then one might as well eat the pancake which cost $1.80 each, than to buy a box of 4 mooncakes for $88. It doesn't quite make sense to me. But I can't deny that the durian is really good.

How was your mid-autumn festival this year? [:


No comments:
Email ThisBlogThis!Share to TwitterShare to FacebookShare to Pinterest
Labels: Mooncakes

This year, I was pretty excited about Raffles hotel's new snowskin durian mooncake. 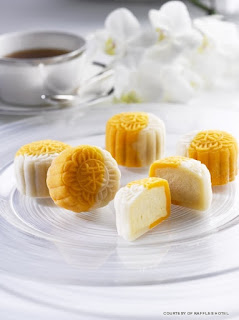 I was excited to see if it's better than Goodwood Park's. However, I went to the Taka Mooncake fair with The Star and we both felt that Goodwood Park's durian mooncake cannot be compared to Home's Favourite. We saw many people at the Home's Favourite stall and we headed over too.(yes, typical Singaporeans hahaha) The friendly lady at the stall offered us a generous sample of the D24 one before offering us the Mao Shan Wang. She said that we have to try the D24 first before the Mao Shan Wang to taste the difference and most people usually pick the Mao Shan Wang. After trying the MSW, I must say I was kinda immediately won over by it. The thought of Raffles hotel's durian mooncake disappeared from my mind. 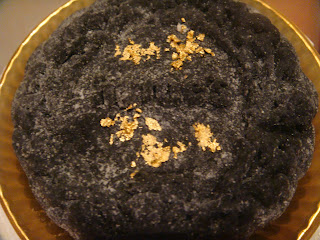 The black skin is made of some charcoal powder thing that is supposed to aid digestion. Another plus point ding ding!

This year, Home's Favourite also had another top grade durian mooncake which was sweeter than the MSW. I quite like it, like duh, cause I like sweet stuff. The lady told us that this top grade durian that they use only comes into season once in three years. So obviously I was like WOAHHHH I think I want this. Haha but I guess it'd be too sweet for my family and all. So I decided on the MSW! And The Star bought it for my family and I. Hehe. It's $70 for 4 mooncakes and the top grade one is $72. These were the most expensive mooncakes I saw at the fair.


It was my turn to find a box of nice and pretty mooncakes to give to The Star's family. He was talking about the Fullerton's Snowskin Treasures which consist of 4 different mooncakes : Mango Pomelo with Sago, Honey Pineapple , Chocolate Banana with Chocolate Chips and Durian Red Bean. 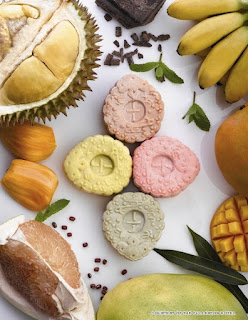 Sounded really weird to me but he was kinda interested in them so I bought it for his family. BOOM the reviews were horrible. First he told me that the mooncakes tasted really bad and next his mummy told me that the mooncakes were bad too. From the strange flavours to the thick skin.. They weren't nice at all.. Pretty embarrassing don't you think.. I was like "oh shit.. " but didn't know what to reply his mummy. Stupid Fullerton come up with fanciful but awful mooncakes. TSK.

We walked around the fair and sampled quite a few other mooncakes from various places. We tried the champagne and truffle one and another expresso one from Jewels' artisan. They were just okay. Apparently Raffles Hotel's Champage and Truffle is quite good. The Star bought the Champagne and Truffle one from Raffles and Fairmont last year. He said they were not bad. We also tried the custard mooncake from.. (I forgot the name) Tasted average but seems to be quite famous.

My mum wanted me to buy a box of double yolk traditional mooncakes and we couldn't decide which to buy. The Tung Lok mooncake box was REALLY UGLY. So we gave that a pass. Took me sometime to decide to buy from Fullerton cause I thought the box was prettier. Hahaha. The double yolk one was sold out at the Fair and the staff wasn't sure if they were gonna have more stock etc zzzz so we drove over to Fullerton to get the double yolk and the gross snowskin treasures. This is the moment in my life that I'll look back on and regret always. The only consolation was the Citibank discount..

Happy with my MSW from Home's Favourite but really sorry about the distasteful Fullerton Snowskin Treasures. Contemplating to get his family another box of mooncakes.. Any recommendations?

Have a fun Mid-Autumn Festival everybodyyyy!