IPL vs SHR vs Laser
I think alot of us very commonly make the mistake of saying we are going for laser hair removal. But IPL and SHR treatment are NOT laser treatments. And they're not as effective as laser treatments. 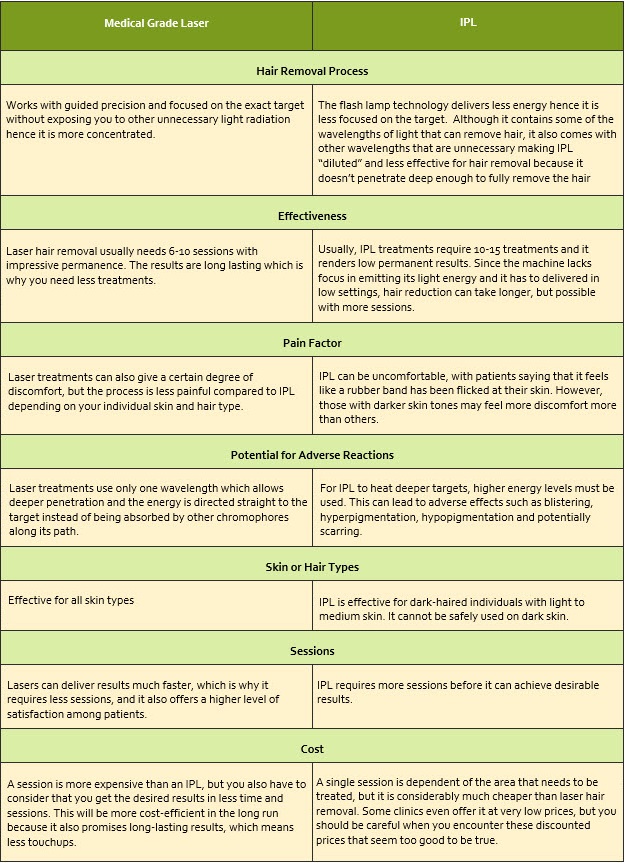 I'll be sharing about my experiences with hair removal in this post.


First Experience
I first tried hair removal back in 2017 when I was in Melbourne. I went to Laser Clinics Australia at Emporium. I opted for a one-time Brazilian treatment and I was actually really afraid because I'm extremely scared of pain. I don't remember how much I paid for it but it was a first-time trial so I probably didn't fork out much. The staff used a pen-like device with like a rolling ball on it. So she rolled the ball on my shaven skin and it felt like someone was pinching me very sharply continuously. It was painful! And the area was kinda smarting after that and I had to put like laser aid (some soothing cream) on the area for a few days.

Second Experience
The next time I tried hair removal treatment was in December 2018, I signed up for a 6-session package for 5 areas since I was going to be in Melbourne for awhile. The 5 areas were armpits, legs (considered 2 areas), snail trail, and Brazilian. The package was about $600 so I thought it was super worth it! I went to La Belle Clinic on Elizabeth Street. The Fotona laser hair removal machine that they were using was super cool. The hand-held device emits a red light(the latest Fotona Frac 3 lasers) and the device doesn't even touch your skin at all!! The staff will just hold the device above your skin and move it all over the areas that they're supposed to cover. So sometimes you smell a little burning smell if there's still residual hair that you didn't shave off completely prior to the treatment. I love that it's painless and it's really effective. The hair actually falls off so the areas will be like hairless for maybe 1-2 weeks before hair grows really slowly and you see a significant reduction in the volume of hair growing out. So I really felt that it was super effective, and the best part was that it didn't hurt. If you want the treatment to be stronger, they can increase the strength of the red light so it does cause a little discomfort on your skin, but it's completely bearable, even for someone like me who is scared of injections.

Third Experience
So I completed my hair removal treatment in Melbourne in June, and I came home to Singapore in July 2019. So my armpits and my legs are pretty clean but the Brazilian area could use a little more work. So I started looking for hair removal packages online. I came across Icon Aesthetics at Wisma Atria which was offering 6 sessions of SHR Brazilian hair removal for $168. So I made an appointment and I went down and they told me that the package comprised 6 sessions of 100 shots/pulses (which is super little) and they tried to get me to sign up for a package of unlimited shots for $888 or something. 100 shots can hardly even cover the entire Brazilian area. It seems like alot of beauty centres in Singapore are like this? They put out a misleading ad and get you to visit them in person before trying to convince you to take up this package and that. I didn't experience this in Melbourne and I appreciated that the whole process there was honest and effective.

Considering the effects I saw after my 6 sessions in Melbourne, I thought that 6 sessions might be enough for me. I thought SHR was similar to laser since it's not IPL. So I signed up for this package WHICH WAS AN ABSOLUTE MISTAKE. After every session, there's literally no difference in the amount of hair present. Hair definitely wasn't falling out and they were growing back very quickly, to as much as the volume was before the treatment. The staff would press the device against your skin and a bright light, together with a beep, would be emitted when they put pressure on the trigger. The device was very inconsistent. They would press the trigger a few times, and nothing would happen, and they would just keep pressing until it gave off a flash and beep. And apart from the first and last session, I didn't experience any pain at all. And I guess that's why there was zero effect. On my last session, after I told the staff that there's no difference at all, she said it's because 100 shots was not enough and I should sign up for the unlimited package (roll eyes please). I mean, if I have seen zero results, would I still bother trying other packages? She then told me she would increase the strength of the pulses, and it was DAMN painful. I actually shivered and was clenching my fists and I perspired because it was super painful. And the best part? STILL NO DIFFERENCE at all after that. Still no hair falling out, or lessening of hair growth. It was $168 down the drain. And I really hate that they tried to get me to buy another package everytime they saw me.

I don't know whether Singapore is way behind Australia in terms of the technology used. But hair removal is very expensive here, and it seems like some might not even be effective?? And I definitely don't appreciate the kind of marketing tactic that they're using, and how they try to push you to sign up for a package every time they see you. I'm not sure if there is one now, but I hope there will be a beauty centre that offers the same technology as La Belle Clinic in Melbourne does (at the same affordable prices as well)!

So if you're thinking of going for hair removal, be sure to know the treatment you're going for. I think there's a possibility that the staff don't even know that IPL or SHR is not laser, and just lump them together, so you could be misled.
Email ThisBlogThis!Share to TwitterShare to FacebookShare to Pinterest
Labels: Beauty