Situated in Sunset Way, with a really nice ambience, Buttercake n Cream was the first dessert place The Star ever brought me to. He couldn't stop talking about how good their desserts are and of course I had to try it to find out. Many might not have heard of this place before, but if you happen to be nearby, skip Dailyscoop and head to Buttercake n Cream instead. They might surprise you with their interesting creations. I had the Warm Chocolate Pudding on my first visit. They ran out of vanilla icecream so they replaced it with raspberry icecream. Being a non-berry eater, I did not touch the icecream at all. And not having the vanilla icecream to go with the pudding was a downer. But that does not discount the fact that the pudding was delicious! I like it. The portion was pretty huge! For $11, I would recommend that the pudding be shared! If you're a chocolate lover, or souffle lover, you've gotta try it! Anyway, that was the first time The Star and I ever went out and not knowing that I don't eat berries, he ordered Berry Berry Good because they were out of Banana Drama. Haha when he offered me the icecream I was like.. Err.. I don't eat berries. Followed by an awkward OH from him and and an awkward pause. HAHA. We did not take any pictures then because we were shy. HAHA. But anyway I got these off their website so yeah check them out if you can! OH, they only have these two pictures of their desserts! GUESS WE ARE JUST MEANT TO BE HAHAHA(if you don't quite get it, it's because those were what we ordered hahaha) 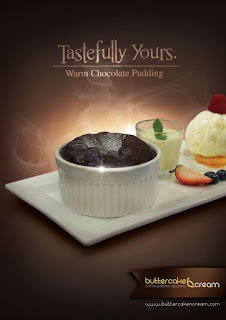 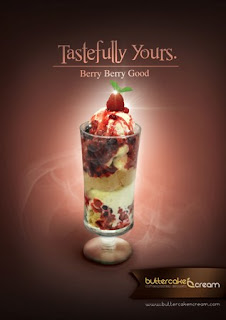 Well in any case, we went back there again and tried their milk tea with cookies sundae. Hmm, the sundae was just alright. 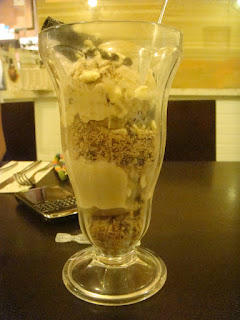 and The Star finally got to eat his banana sundae. Such a happy boy hahaha. Love seeing how happy he is when he gets his desserts haha