Here's to my favourite boy who loves his icecream with marshmallows and gummybears.

I used to think that The Star is weird because he adds marshmallows to his icecream. Like, who does that??? Haha. Okay, actually I still think it's weird haha. And he thinks I'm weird because I add oreo to green apple froyo. Even though The Star has his weird style of eating his icecream, you will just look past his weirdness when you see how happy he is when he's eating it. Hahaha. Everytime I buy froyo now, I add marshmallows and gummy bears although I don't eat them. This is to shut him up so that he cannot complain that I am mean. HAHA no lah, I'm just kidding. Of course I add them in specially for him [: 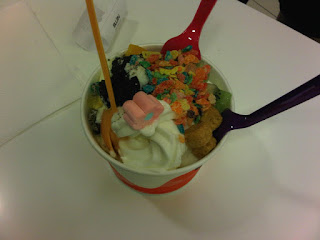 This was at Swirlart when I refused to add marshmallows and gummy bears. HAHA only added one marsh and like maybe 3 gummy bears to appease him.


Because of him, I've learnt to try new things. Like The Star made me eat oysters, green bean soup, avocado juice, tau sar pao etc. This may sound a little strange but it's because I am extremely picky when it comes to food and I don't eat ALOT of things. And by alot, I really mean alot. Like I've never eaten watermelon and strawberries before. Yes, that's pretty messed up and insane I know. But The Star has opened up my tasting world to food that I'll never have tried if not for him. Even though I'll never try some for sure. Let's just say that I'm lucky that God has placed him in my life to bring me to more glorious food haha.

After we started dating, we've both put on alot of weight because of our eating sprees. We're constantly on the search for good food, especially desserts. It's no wonder how when we stepped on the weighing scale, we both got a shock of our lives hahaha. But I love food hunts with him nonetheless. And I love how he puts so much effort into planning them, into surprising me and into making sure that the food hunts run smoothly. Such a thoughtful boy <:

It's now 5.03 am and The Star has just gone to bed. It's time for me to turn in too.
I can go on food hunts with you forever. And I hate to say this but I guess we'll really grow fat together hahaha
Goodnight xx

Sun's rating of The Star : 10.5/10
Email ThisBlogThis!Share to TwitterShare to FacebookShare to Pinterest