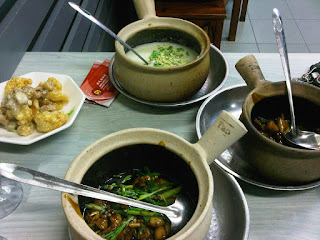 We were hungry one night and wanted supper pretty badly. So, we went to Chun Tin road (opposite Beauty World) which I think is a pretty good place for supper. We couldn't decide if we wanted chicken rice or frog leg porridge and had to play a few rounds of rock, paper and scissors to decide(yes, I'm not kidding)haha. As you probably would have already known(from the picture) that we had frog porridge in the end. 5 frogs, a whole pot of porridge and prawn salad you tiao for the two fatties. Full and satisfied we definitely were! I wouldn't say its fantastic but it's VERY filling for two empty tummies. We spent around $30 which might be a bit pricey for supper but well, we don't eat frog leg porridge often!